Industrialisation has become an abstract entity rooted in history. You can go to a museum and see machines as artifacts, and hear the stories of the hardships of workers, with the same distancing from reality as a child reading a ‘Horrible Histories’ book. Perhaps the current need of artists to revisit our industrial past stems from their desire to keep it current. After all, industrialisation is only a matter of history for the western world, but in other places industrialisation is happening right now. Even here in Manchester, industry didn’t start properly declining until the 1960s, so it’s solidly fixed in living memory. And of course the effects of industry will continue long after operation ceases through climate change.

Hannah Leighton-Boyce explores history and memory, leading to an inquiry into the legacy of industry in much of her work. She often works with found objects or past occurrences, unearthing things that have been lost to history. The now defunct textile manufacturing of Northern England is a recurrent theme within her most recent works. For this reason she naturally finds herself working with industrial heritage sites. These mill museums represent the antithesis to Leighton-Boyce’s work in a way – they are the very institutions responsible for burying certain memories, whilst turning others into artefacts. Her work deals with these issues in a subtle, non-confrontational way, thereby working within the constraints of these institutions while still preserving the integrity of the ideas. 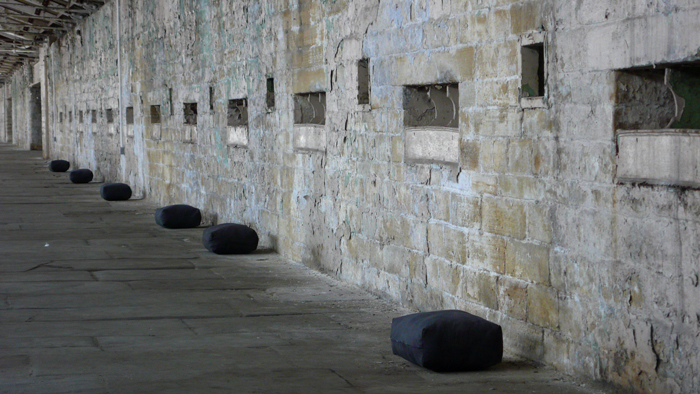 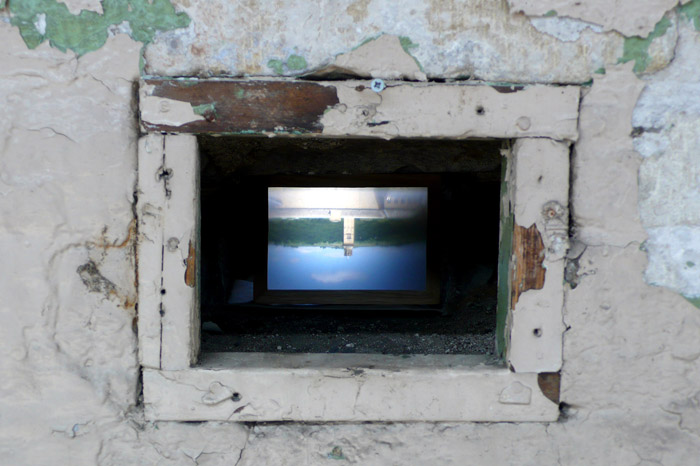 Hannah Leighton-Boyce’s piece The Windowless Shed Camera Obscura was part of the exhibition Cloth and Memory {2} at Salts Mill in 2013. The site-specific work was housed within the walls of the Salts Mill spinning room (formerly the largest industrial room in the World). The piece consisted of 7 camera obscuras installed into the ventilation alcoves of the previously windowless room. By revealing these never-before-seen views, the piece reactivates the Victorian sense of wonder. A contemporary art audience could easily mistake the work for light boxes. However the longer contemplation time the viewer is encouraged to take by kneeling on a cushion to view the scenes, means the mechanical simplicity of the camera obscura is revealed (through a slowly moving cloud or a flying bird).

If Walls Could Talk – The Last Yarn

The World Said, And The Consequence Was ©Hannah Leighton Boyce

The Windowless Shed Camera Obscura was the catalyst for two new works by Leighton-Boyce. One was If Walls Could Talk – The Last Yarn. This piece consists of a film by Mary Stark, and balls of wool. The film documents Leighton-Boyce hand spinning wool found within the walls of the room. Wool wasn’t the only thing she found in the walls though. The piece The World Said, And The Consequence Was is an archive of over 100 objects all also found in the walls. The collection contains various victorian industrial and non-industrial paraphernalia – a sewing needle, bobbins, broken machinery, cogs, brushes, trade meeting tickets, a boot, a wrist protector, cigarette packets and much much more. The sense of wonder prevails. For what reason are the walls filled with all this stuff?

Leighton-Boyce describes the piece as a “memorial to the act of finding”. Finding can be a very emotional thing. in this case it was never on the cards – she was faced with a large, clean, bare space. She says:

Within the now vast and empty space of the spinning room, these small dark rooms recessed along the outer walls were, it seems, the perfect space for discarding, hiding, loosing, and preserving not only fragments of wool but also a wide range of objects. Once I began, the event continued to unfold, object after object entangled with wool, rust, oil and dirt raging from centuries old to more recent and familiar lifetimes. It was an incredibly moving experience. Each small room contained an archive, which unlike a typical museum collection, crossed time and hierarchy; from the everyday and personal items to industrial remains, creating a unique portrait of the people who worked there and a narrative of the events around the space.

I remember thinking when seeing her piece East Wing 1939 – 2011 that there is an unnerving sense of precariousness to a practice reliant on ‘finding’, but somehow the finds keep coming. Another interesting thing about this piece is the fact that in a way, it never existed. It was documented but never viewed directly. This is due to the fact that despite found by Leighton-Boyce, the objects of course belong to Salts Mill. The collection has been re-archived. No doubt some items have been discarded as insignificant (given the limited space of a gallery archive, they wouldn’t bother storing hundreds of cigarette packets and sweet wrappers). If any of the items are ever shown again it will be in a new context – one as an object in a museum. So the term ‘memorial’ does seem appropriate. The objects, and the piece with them, have been re-buried within the walls of an institution.

The proposed work Tenter Lines [working title] also deals directly with the historicising of industrialisation. The work will respond to the site of the tenter fields above Helmshore Mill and will explore the shifting relationships between people and place, culminating in a ‘happening’ this summer marking the sites of where the tenter frames once stood. Tenter frames were used in wool production to keep cloth under tension whilst drying so it wouldn’t shrink. These large frames and expanses of fabric would once have been a dominant feature above Helmshore Mill, as well as the constant flow of workers carrying cloth up and down the hill. But where the frames once stood is now a housing estate; built in the 1970s, the estate coincides with the decline of industry and birth of the digital revolution. Like many Mill towns, Helmshore, which once had a strong local economy, is now primarily a commuter village, and the estate shows no indication of its industrial past – not even a street name. So Leighton-Boyce is unearthing a hidden history and again creating a kind of memorial. By mapping the site with an action, the work will mimick the the fact that it was the action that marked the place previously, not any permanent structure.